I love karst landscapes. Wisconsin’s Door County, where I was born and currently live, is a monumental block of cracked, leaky Niagara dolomite, riddled with caves. Southern Poland, where my novel, A Drum Is Empty, is set, has it beat all to heck for caves, sinkholes, water-sculpted limestone cliffs, and monadnocks (huge free-standing rocks).

A shallow sinkhole provides a convenient camping place for kidnappers with evil intent in ADIE. It’s out of the wind and concealed from view. Un?fortunately, it makes sitting ducks of the bad guys for a sling-toting stone age sharpshooter like my MC.

This morning, I discovered a much less handy hole half a block from my home. Apparently the large snowblower that clears some of the sidewalks knocked an old storm sewer lid half off last week. I have walked past it every day, but didn’t see it until I was coming back from the laundromat today. It must have been concealed by snow until the weather warmed up; then the snow fell in — a man-made sinkhole!.

When I saw the hole, I said a couple of rude words, stared a bit, and then hastened home. Leaving my bags of wet wash to amuse themselves for a while, I scrounged up the makin’s for a couple of small marking flags. (Damned if I had the energy to drag a plank out of wherever….) I went back with two blaze-orange markers and my camera, shot some pics, and then returned home to leave a message on the street department’s answering machine.

Then I hung the wash and fed my hungry face.

It’s plenty big enough, and deep enough, to swallow a small child or an animal, and an adult could be trapped and/or injured.

The lid is not only heavy, it’s covered with snow and frozen down. Owoo.

I made one mistake in buying a ready-made drum. It was so shoddy there was no way to tighten it up enough to get a decent sound out of it. So I took it apart. The fourth-rate rawhide heads can be recycled into rattles. The frame, after a little work, was fit to use again. Not high quality, for sure, but solid enough if not abused.

Now the frame is reincarnated with a decent head. Part of this adventure was cutting a length of 1/4-inch rawhide lacing in half. I invested in an obscene quantity of 1/4-inch lacing because it was the best deal I could get. Way too chunky for most of my smaller projects, but when soaked it can be split with a sharp scissors. Slowly. Inching along. But worth doing.

The decorating was done in great haste with acrylic paint while the head was still damp. I did some research on this, to find the best and safest media. My coffee can drum, “First Raven”, has a couple of ambiguous symbols dabbed on in soot and spit with a finger. Any fine particle pigment can be embedded in the damp surface.

So here’s the newest in my growing collection, 12″ in diameter, hanging from a nail in a doorway to dry: 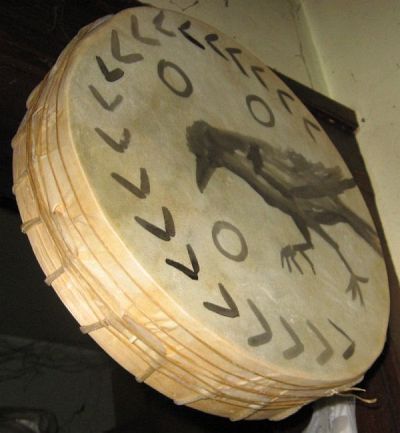 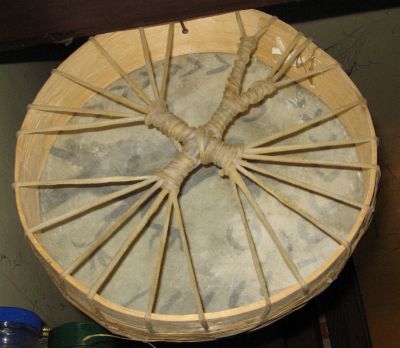 “Raven Dances” … the world into existence.

I still haven’t dug up that adapter for the microphone. Too much snow to shovel.

Morning-after note:
w00t, this baby has a voice! *reminds self to look for adapter*

I got up a little too early, and a little obsessed. This was the result: 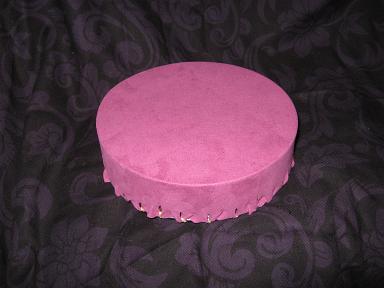 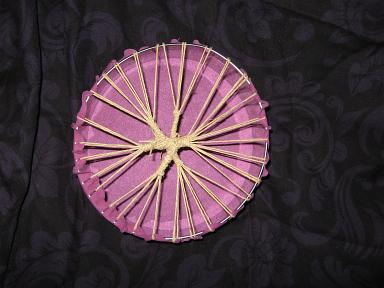 The head is ultrasuede. I have a lot of odd pieces from when sewing machine art was my current obsession. While looking for things to get rid of, I ran across my stash of purple, and its stretchiness made me think… Heh-heh.

So, for my before breakfast chore this morning, I sat down to prove it would work. Within an hour I had a decent sounding drum — for its 6 5/8 inch size — and sore fingers. The stainless steel hoop frame was originally intended to make pancakes perfectly round. It’s still close enough to round after stretching the ultrasuede as tight as was practical. The binding is hemp cord.

It wants a light-weight striker, and likes a quick, light beat. Kind of a happy-dance drum. 🙂

I’ll upload a short sound sample as soon as I dig up an adapter for my good microphone.

I tread a patch of thin ice here. My world–our own distant past with a twist of magic–has no strict, uniform magical system; at least not one that is known to its people. My characters have no superpowers. Unusual abilities, perhaps, but they don’t rival the forces of nature. The gods keep their noses out of things. They are seen in a few muddled dreams and visions. A reader might see these as figments of the characters’ imagination.

However, I take out one of the bad guys with an amazingly coincidental bolt of lightning.

No one (in the story) can explain it satisfactorily. On one hand, my MCs are accused of calling down the fire from the sky by sorcery (a delightfully vague concept). On the other hand, some people insist that the Good Spirits were ticked off at the deceased. The fact that one of the good guys all but had to be carried away doesn’t bother either side.

This ambiguous event is entirely in the realm of everyday possibility. Stand out in the open when a violent summer storm is approaching and…POW. There is a high probability of lightning striking just ahead of a storm; you don’t have to be in a downpour already. No need for threads of stray magic to act as a lightning rod, either, but they were there.

What none of the surviving characters knew at the time is that the thunderstruck man posessed–and was possessed by–an ancient talisman that contained the demented soul of the sorcerer who created it. What’s more, it held power stolen from many others, and an uncertain number of trapped souls collected over thousands of years.

Perhaps the talisman was close to some kind of “critical mass”. At any rate, it hungered for yet one more soul–that of my main MC. Its owner, who had hoped to use it to increase his own power, was thwarted and angry. The escaped sacrifice was tantalizingly close again. A thunderstorm blew down from the ice-capped Tatras to bedevil the Krakow uplands. Was it a logical consequence, or was it a DEM?

What exactly makes a word or phrase “too modern” to be used by a resident of the Pleistocene? Can anyone give me a nice concise accurate dictionary of caveman-speak?

I don’t think so.

I am constantly amazed at how one person after another can pick out dozens of “wrong” words — and no two lists are anything alike. Each reader has a unique set of pet peeves. Most of it is from (IMHO) expectation based on assumptions ingrained by exposure to Hollywood crap. Movie cavemen must talk like cavemen. Pile it on, grind it in. They are dumb savages, right?

Wrong. They are our ancestors, and they were some damn smart cookies. They created works of art that put goosebumps all over modern viewers. They were human beings who concerned themselves with food, hunting, survival, what the neighbors were up to, and why the stars stuck to the sky. They had rich, complex language that we can only guess at from root words that survived in many modern tongues.

So, why is it wrong to interpret their (fictitious) thoughts in words that come as close as possible to what they intend to say?

Every word that I use to write is modern English. Where do I draw the line? And then there’s the other side of the coin. My vocabulary is large and eclectic. It isn’t limited to what some people hear on TV. Is it all right to use a word that Shakespeare liked?

I’ve always kvetched about how clunky and horrible Java is. I suppose it still is, but now that I have DSL and am getting to be a spoiled brat, I have to admit that wordl is fun. Here’s all of ADIE in one tidy little word cloud: 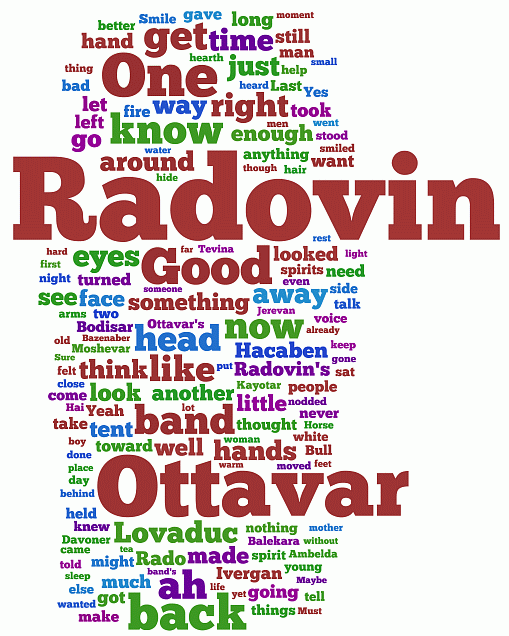 I guess it’s kind of obvious who the MC is.

Sometimes I have wondered if the story wasn’t taking on a YA tone, and thought maybe that was the way I should go. But my intent is to appeal to a wide age spectrum. I never set out to write YA. My MC is in his teens because that is when a pivotal series of events changes his life. Among his people, anyone his age is considered an adult. He is undersocialized, however; a paradoxical mixture of someone who is both mature and young for his age.

Why should the age of the MC matter? When I was young, I liked to read about adults, not stupid kids. I read heavy stuff, I wanted to explore. Now I’m an old foguette and I like lighter reading. Harlequin Romances aren’t labeled YA because they spare the brain cells.

What set me off is that someone somewhere said my query sounds YA — and mostly useless. What can I say? I try to get the MC’s voice into it, and get slapped down for oversharing. Wottever. I’m done with posting any kind of WIP anywhere for now.

Meanwhile, I have come to doubt my genre. That’s a shitty feeling. I don’t like being labeled. Should I knuckle under if someone points out that it’s a mystery because there are a few murders in it? Or that it is erotica because the MC has a coupla good boinks? What gaddamn criteria do I have to meet, what are the ninky little rules? It’s a friggin fantasy, all right?

Thank God(dess) no one can claim it is romance.

Working over WordPress is simple, if you know a little CSS. I’ve done it enough times, set up sites with it, so why not use it myself, right? 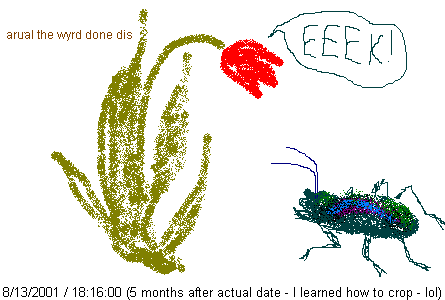 Yes, foax, that is the first drawing I made on my first very own computer, The Thang. It was spring, hence the tulip. MS Paint doesn’t get called on so much these days. I have enough RAM to run The Gimp whenever I please. But it was fun back then to see what I could do–especially since my system only understood 256 colors.

I spent a whole Saturday evening at this: 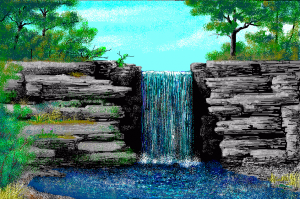 Click to see full-size. Lucky you–when I drew it, I couldn’t see the whole thing in my ancient monitor. I’m still pretty happy about how the water sparkles. 256 colors, remember.