It all started because I wanted a way to permanently save interesting TRON patterns with their proper colors. Change TRON to another element by any means, and it’s all one color. The Temporary-Account-Decorator script only recognizes deco and normal default element colors (which you can find in the source code), and live TRON color is determined by its tmp. Trying to understand how the tmp works opened a big can of worms.

Other properties are also in tmp, so there is not a simple progression in just-spawned TRON particles. Spawned tmp has a variable range for any color. Once it becomes active, the head-tail tmp pair is the same for any TRON of that color. They go up from 0 (tail) or 16 (head) in steps of 2048.

Then I accidentally discovered that TRON with high tmp2 value could be “frozen” by trapping it in another solid element. The tmp does not change when TRON is frozen. I’m not the first; spinon documented it in a save several years ago, before I even got into TPT. Others have used solid TRON. But it isn’t done much. At any rate, I dropped the idea of a script for the moment.

***I have also found that the common practice of setting life high as well as tmp2 is mostly irrelevant.  TRON life values rise spontaneously when it moves.***

Fiddling with the numbers, I found a range of tmp values that produces EverTRON — neverending, undying TRON with default life and tmp2. Beginning at 43 and incrementing by 2048, an EverTRON particle makes a trail until it boxes itself in and freezes. Its tail and head tmp values start at 8 and 24, and they can be used as a solid element.

EverTRON tail is a durable material that conducts heat well. The head is good for stars and suns, neon signs, and other bling.

43 is not the only base number that will produce EverTRON, but other series, which all seem to start with numbers that end in 1, 3, or 9, revert to the 8/24 bases for tail and head values. I haven’t explored every possibility; there may be some use in different values for setting behavior. E.T. is less random than normal TRON; it zig-zags only when disturbed by other particles.

Then there is Zombie TRON, so-called because a straight line of it will march together until circumstances cause separation. Or death — a line of Zombie TRON will march off the edge of the map. It also behaves like some Game of Life particles when nearness to edges or other particles make the lines break. Z.T. is not useful, but it’s fun to play with. The tmp progression is in a high range. Tmp2 can be varied for effect. 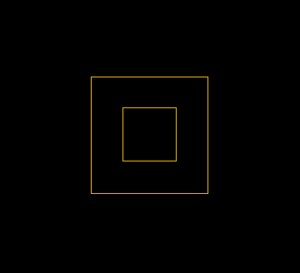 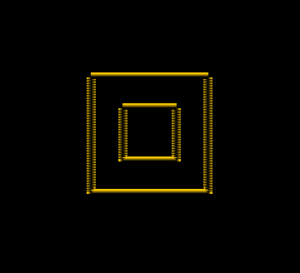 When making things out of TRON, always work with the game paused. EverTRON and its tail and head forms don’t need life and tmp2 changed from TRON default values, but if you change another element into TRON you will need to check those!

Drawing with special TRON is made easier through a script that can be downloaded using Cracker64’s Autorun Script Manager. If you don’t have the Script manager (autorun.lua) get it from the TPT Script Server and put it in your Powder Toy directory. It adds a Lua button to the menus. Open TPT. Click it.

In the script manager, click “online” and find “All-seeing sampler” (way the HELL down at the bottom of the list), and download it. Then in your Tools manu, you’ll have a button to click that lets you pick up any element with all its current properties and draw with it. This is epic; you can brush-clone all sorts of stuff with special props.

If you want to do a lot of drawing with permanent TRON this way, you should make a palette stamp with small samples of every color. That would also be a good quick reference to read tmp values in the HUD if you’re just using the Prop tool.

Oh, yes, those tmp values! I made a PDF TRON_tmp_reference — download and enjoy. 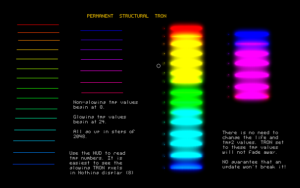 You can find my TRON reference saves too, of course.

The easiest way to use EverTRON is to get djy0212’s All-seeing Eye Sampler script (146). Then you can steal my TRON palette stamps — id:2254311 — and paint away. TRON is a useful solid. It adds color without deco. Setting the life property can be useful, for instance: disappearing text, timed detonators (hint – it’s acid-proof). The glowing types make nice stars. Colors can be mixed — and layered — to make different colored lights.

Research continues, of course. Dark TRON needs further work, for one thing. If you are more of a mathematician than I am, maybe you can make sense out of the TRON behavior spectrum. My work is more intuituve than scienterriffic.

Fire From The Sky > Shenanigans > TRONology