This was my first “signature” piece. I still have seen nothing exactly like it. The only thing that makes it different is the final lock fold; it was a “what-if” that came up during a lot of shifts in a folding sequence. When I saw the final product, I was astonished.

I have at keast one video up somewhere, but it should be replaced, as I have refined the folding process since then. This photodiagram is as simple as I can get it.

Incidently – PLEASE do not believe that you need Adobe Bloatware Reader in order to view PDFs. If you have it installed, do yourself a HUGE favor and take a moment to get rid of it. Then install SumatraPDF, a free, fast reader that doesn’t try to own your computer. I am, of course, speaking to those burdened with Windows. You have enough problems without a great big blob of Adobe attitude.

I run Linux, so I don’t have to go hunting for good software 😉

I love small things. Looking at origami furniture models, I thought how fun it would be to assemble a paper suite for Borrowers. But out of all the chest-of-drawers type models available, I found none that I really wanted to fold. Either they were fussily complex, or not proportioned right.

So I took paper in hand and started experimenting. This is what I came up with. Based on the traditional masu box, it works and looks pretty cool. I’ve constructed three so far, and I’m sure there are some variations that will be lots of fun to discover.

For the shelf units, start with a square of paper folded for a masu. You need to know how to do that anyway. 😉 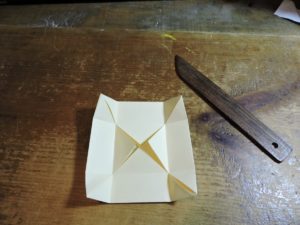 Fold two of the triangular sides back. The points are going to remain outside the box. 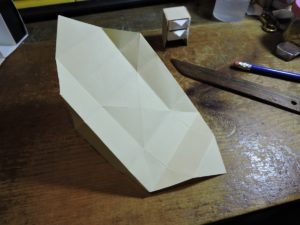 Fold the front flap inward. This leaves the front open, and creates side pockets that will receive the pointy tabs of another unit. 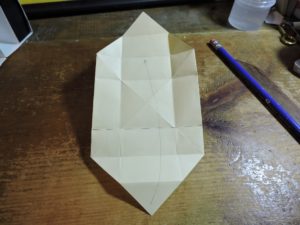 Fold the rear point down, because we don’t want it getting in the way of the drawer! 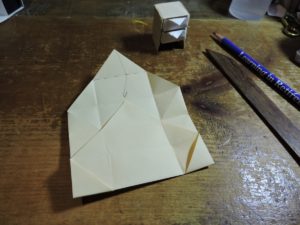 Collapse the back in as you would a normal masu. A little glue here is good, because you can’t get back in there handily after the whole thing is assembled. 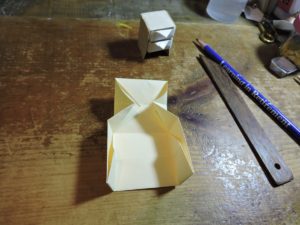 Here are some finished shelf units. 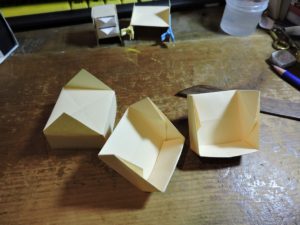 Now for the drawers. They need to be a little smaller so they slide well. Exactly how much smaller depends on the paper. Using heavy paper for the shelf units gives greater solidity, but it also fattens the sides, leaving less room inside. You will have to do a test fold to see exactly how much smaller your paper should be. It could be cut smaller, but I prefer to fudge-fold it so I can use the same size sheets for all parts. The fudge-fold also strengthens the drawer and helps make a nice pull.

Before finishing a drawer, you might want to test your fudge. This is also useful in making covered boxes. 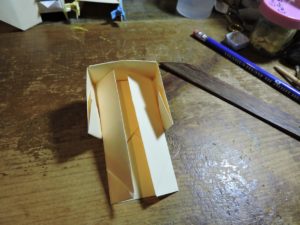 Fudge folds are done on the backside of two-color paper. They must be straight and even. If your fudge is sweet, the paper will still be perfectly square 🙂 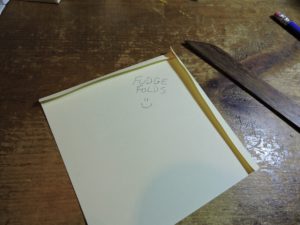 Anyway, on with the folding. Do the same old masu folds, with the fudge-folds inward. Then open it up and find the point where the fudge-folds meet. Fold it up so that the double fudge triangle peeks over the edge. 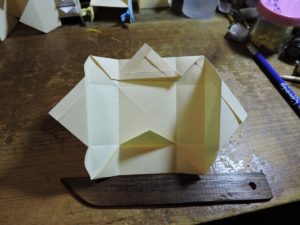 Now fold the point over the edge to make a nice drawer-pull. 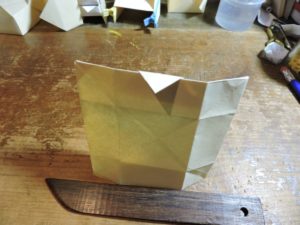 Bring the front and back up, ready to fold in the sides. You can fold the side and back points under first; if your Borrowers are neat-freaks they’ll appreciate this. We’re doing the collapse-in on the sides because 1. the front flap is altered and 2. it makes the sides of the drawers stronger. 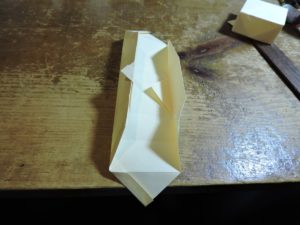 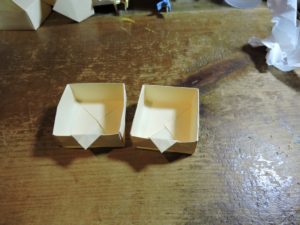 Putting it all together!

Now, put the loose flaps into the pockets. Put a dab of glue in the pockets first, and make sure all sides are aligned and tight together before clamping. 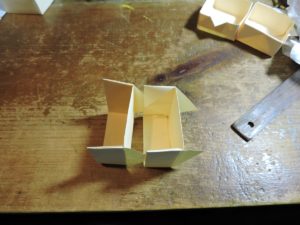 There’s nothing like a bunch of cheap made-in-China hair clips for origami clamping. 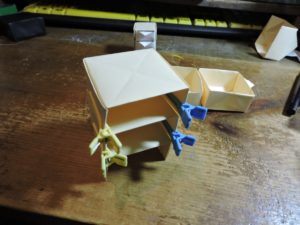 When it’s all solid, in go the drawers. 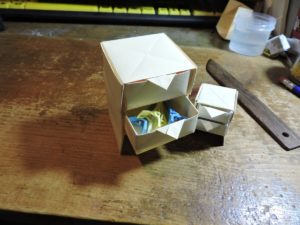 Note that the top unit has its “ears” folded in. Even if you forget to do it while folding, they should tuck in fairly easily…usually with a little help from a paper creaser and a sharp knife point. I always forget. :p

The bottom shelf unit can be folded differently to give it a more polished appearance. It doesn’t need the gozintas anyway. 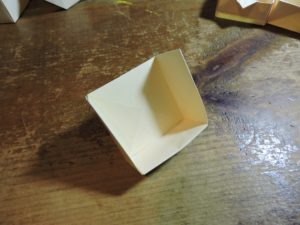 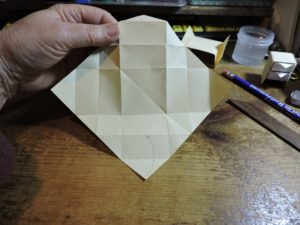 Fold it down onto the underside. The side flaps will cover the odd bits, and lock it in place. 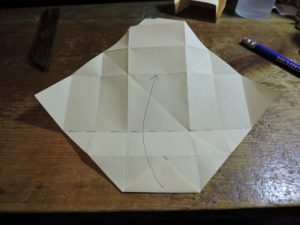 If you don’t want an open space in the bottom, you can simply make a base with all four sides by not folding the front side in, or maybe do something creative with a menko or modified Sonobe unit or whateverg. It has to have something under the bottom drawer, but it doesn’t have to be a space to chuck shoes in.

Number of drawers is up to you too, of course. The ceiling’s the limit. It should also be pretty easy to side-connect two or three sets for a wide storage unit. I can imagine two linked by a flat piece for a desk or vanity. That kind of flexibility was one of my requirements for this project. 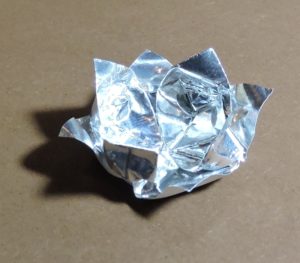 A bit of background first. Twenty-odd years ago I was heavily into origami. Because my health was poor (as a result of poverty) and my low-paying job was exhausting, I needed something to do while mostly doing nothing. Origami was my key to couch occupation.

Since then I’ve forgotten a lot, including some original models that I didn’t bother to diagram. But it’s coming back with a bang. Now that I can afford to buy pre-cut paper, and can order online, I have material to fuel my passion to new heights. So far I haven’t accomplished any noteworthy feats, but my reclaimed skill increases with every fold. And I am diagramming anything that I give a personal twist to. This is about one of those little modifications.

In order to fold a Lotus Flower from three-inch paper, I simplified the method a bit. Skipping one round of corner fold-ins allows me to produce a respectable lotus without straining my not-so-young eyes and fingers.

Here is my diagram, created with Inkscape:
lotus_simplified.pdf 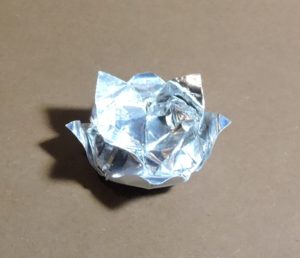 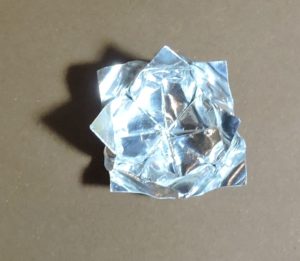 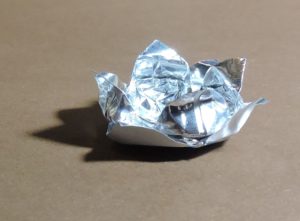 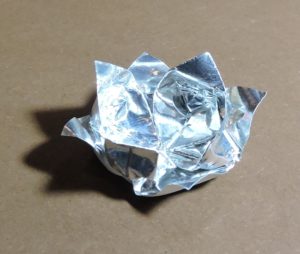 One thing I found difficult at first was pulling out the main petals. This Youtube video helped me:

Now I often do this step with my eyes closed, the better to feel the movement of the paper. It almost never tears when I don’t watch.

Youtube didn’t exist when I first leaned origami; I had nothing but diagrams in books. However I do find videos helpful and recommend them to all beginners.

Fire From The Sky > origami